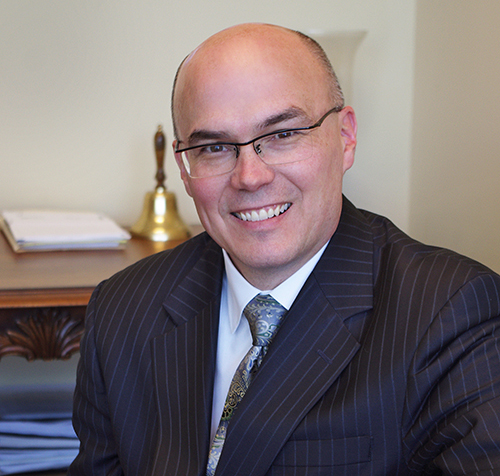 About
Professional Academics & Achievements
About

About
Mark grew up in Rockville, Maryland. He received a Bachelor of Arts degree from the University of Delaware in 1990, and, after graduation, spent six years as a high school social studies teacher. In 1996, he was named as an honorable mention by The Washington Post Agnus Meyer Outstanding Teacher Award. Mark left teaching in 1996 to pursue a master’s degree in American History, which he received from Wake Forest University in 1998. Mark graduated from the Wake Forest University School of Law in 2001, where he was honored by being named to the Order of the Barristers, and was on the National Moot Court Team that won the Eastern Regional competition.

Mark joined Robinson & Lawing, LLP in August 2002, after spending a year as a law clerk for the Honorable Ralph A. Walker of the North Carolina Court of Appeals. He is a member of the Forsyth County Bar, the North Carolina Association of Defense Attorneys, and the Workers’ Compensation and Employment Law Sections of the North Carolina Bar Association. He was honored by his peers to serve as the Chair of the Executive Council of the NCBA Workers’ Compensation Section from 2013-2014. Mark was named a “Rising Star” by Super Lawyers Magazine (2011-2012) and has been honored with an “AV Preeminent” Peer Review Rating by Martindale-Hubbell®. Since 2014 he has been listed as a Best Lawyer in America – Workers’ Compensation, Employers. He has lectured on numerous topics relating to workers’ compensation and employment issues.